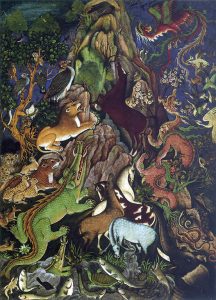 The Assembled Animals Complain to the Raven

The Assembled Animals Complain To The Raven is part of the Anwar-i Suhayli illustrated manuscript. This was a collection of fables that features animals and uses them symbolically. This detached folio focuses on the troubles in the world similar to Farid al-Din’s story; there are many connections between the story and this painting. The birds of the world referenced in Farid’s story appear throughout the painting. Leading a flock of birds in the upper right corner is the Phoenix, which is painted with a vibrant array of vermillions, jade greens, ochres, browns, and whites.This feature of the painting is most likely referencing the end of Farid’s story when the remaining birds,now unified, realize that together they make up the Phoenix. This piece certainly resembles a fantasy; the placement and arrangement of the figures and the way they are represented is quite unrealistic. There is also quite a few mythical creatures in this painting, such as the Simurgh and the dragons, which further contribute to the fantastical nature of this painting. The figures in this piece are representational, the creatures are proportional and they appear to have some volume, so they don’t appear flat or static. There is a strong upward directionality in the painting, which creates movement towards the raven standing on the rock. This painting does have a very crowded composition, there is very little negative space throughout the painting; almost the entire paper is occupied. Overall, the painting is an extremely detailed and intricate piece, consisting of a wide array of colors and subject matter.