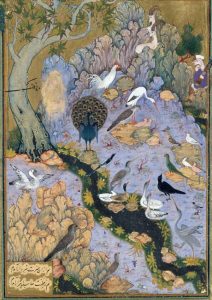 The Concourse Of The Birds

Habiballah of Sava’s “The Concourse of the Birds” depicts a diverse assortment of birds, as well as other creatures, all surrounding a crowned bird. This crowned bird at the center of these other creatures is the Hoopoe bird referenced in Farid-al Din’s story “The Language of the Birds.” This conclusion can be drawn from the display of feathers upon the bird’s head as well as by the arrangement of the other creatures around this bird; all the other birds face the Hoopoe bird. This painting is a recreation of Part I from Farid’s story in which all the birds of the world gather for a conference led by the Hoopoe bird, as he addresses their need for a king.

Sava’s painting helps to characterize the Hoopoe bird as a leader; he stands upon a rock, his posture upright and forward, and all eyes fall in his direction making him the center of attention. The illustrations within Peter Sis’ story (an adaptation of Farid’s story) show the birds of the world in a circular pattern around the Hoopoe bird. This is very similar to the way they are depicted on the folio in Sava’s painting. The painting is a depiction of the beginning of the story in which the Hoopoe bird calls all the birds together and tells them of the troubles and problems in the world: anarchy, unhappiness, poisoned air, etc. The birds in this painting are meant symbolize individual souls, each of which represents a human fault . The Hoopoe believes that a king could solve all the problems and faults in the world, so he leads the other birds through the seven valleys to the Simorgh.

A few of the birds of the world are mentioned in detail within Peter Sis’ adaptation. One of which is the falcon. The falcon displays doubt because it already has a master and is reluctant to leave in search for a king. However, the Hoopoe bird says to the falcon “You like following orders? Follow me!” The stubbornness of the falcons is conveyed in Sava’s painting through their facial expressions: they seem to have furrowed brows. The peacock is also mentioned in Peter Sis’ story, as it symbolizes arrogance. The peacock declares that it’s special and unique, so the Hoopoe tells it to display its colors feathers to the other birds on their journey to the king. This vain personality of the peacock is reflected in Sava’s painting. It serves as a focal point in the painting, flashing its mesmerizing array of plumage for the viewer.

Many of the features in the landscape of Sava’s painting could possibly serve as references to Farid al-Din’s story. There are a variety of complex abstract shapes within Sava’s painting, which could possibly be a reference to the veil of clouds mentioned by the Hoopoe in Peter Sis’ story. The Hoopoe tells the birds of the world how the Simorgh is hidden behind the veil of clouds before they begin their search for him. The complex, folded shapes almost resemble voluminous, puffy clouds. “The Language of the Birds” ends with the remaining thirty birds from the journey seeing their reflection upon a body of water. This is when the birds realize that together they are Simorgh the king. This is consistent with the Muslim belief that the Simorgh symbolizes ultimate spiritual unity. This piece of the story could possibly give meaning to the bodies of water within the painting, as they were used to illustrate an important metaphor within Farid al-Din’s narrative.