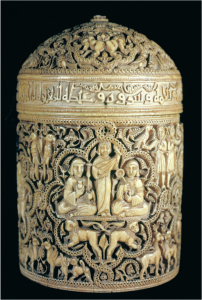 The Pyxis of al-Mughira represents an example of the royal ivory carving tradition of Islamic Spain. Created in AH 357/968 CE, the Pyxis of al-Mughira was most likely made at the Umayyad caliphal court at Madinat al-Zahra in Al-Andalus. Today, this precious cosmetic box remains in the Louvre Museum in Paris, France.

The box is designed with 4 medallions framing several figural and animal scenes. The first medallion scene depicts two men centered around a lute player. The man to the left of the lute player appears to be holding a woven scepter, while the man on the right sits holding a fan-like object. The next medallion portrays two men reaching up for the eggs of two separate eagles’ nests. The eagle was a common symbol of royal power; therefore, this scene expresses important imitations of Islamic court life. The subsequent medallion depicts a mirrored scene of two lions savagely attacking two separate bulls. This motif was also commonly used on ivory carvings to metaphorically assert the strength and dominance of the Islamic kingdom. The fourth medallion illustrates two huntsmen date picking. Both huntsmen sit on horseback, while eagles perch atop the riders’ heads. The scene is symmetrically rendered around the central date tree, that functions as a vertical axis. Viewed together, the body of imagery on this box effectively alludes to important aspects of Islamic court life.

The lid of the box also features a Kufic, decorative inscription written to the caliph al-Mughira. Translated, the inscription reads, “God’s blessing, favours, joy, beatitude to al-Mughira son of the Commander of the faithful, may God have mercy upon him, in the year 357.” This language may allude to the controversial succession of al-Hakam II’s caliphal throne in al-Andalus.