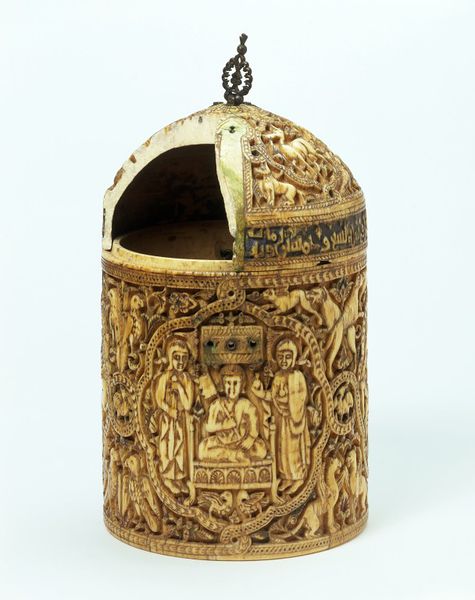 This ivory pyxis was produced around ca. 969-970 and is similar to many of the ivory caskets produced in Spain during this time. Coming from Madinat al-Zahra, this pyxis was made for the caliphal court of the Umayyad dynasty. Part of its lid has been broken away but the majority of the intricate, carved ivory details remain. Today, this piece resides in the Victoria and Albert museum in London.

The figural decoration on the casket is arranged in three medallion frames that line the body of the casket. Each medallion scene alludes to motifs of nobility by portraying men of prestige. For example, in one of the medallions, a male figure sits cross-legged on a throne. He rests comfortably between two attendants that wait on him. Another medallion depicts a man on horseback amidst a variety of other animal figures. Most notably, a falcon rests on the huntsman’s arm, alluding to the popular princely pastime of hunting. The third medallion depicts a man seated in a palanquin that is supported by an elephant. Additionally, two men reinforce either side of the palanquin, reiterating the heightened importance of the seated figure. Collectively, the tripartite of medallions refer to society’s men of high rank.

Additionally, the remains of the lid contain a unique Arabic inscription dating the piece to the year 359 in the Islamic calendar, as well as identifying the patron of the piece. The inscription suggests that it was made for Ziyad ibn Aflah who was a significant figure in the caliphal court. Scholars have identified Ziyad ibn Aflah as a prefect of police in Cordoba under the caliph al-Hakam II.