The next piece is a monumental one (indicated by the large figures) featuring a person riding a horse as the primary image. The garments have a foliate scroll design and a halo if behind the persons head. An angel in a striped shirt and foliate scroll pants flies behind the person, also with a halo. There are a few motifs of birds, one of a fox, and one of a rabbit, in the space not taken up by the person. Single or double stems with dots as leaves on the side are drawn under and at the sides of the person and horse. A cypress tree with a cross-hatch design is on the left. Chevron comes off the border of the top of the bowl with a thick line curved in three areas stopping it (similar to a curtain being held in three places).

This bowl was originally characterized as of the Kashan style due to the appearances of multiple Kashan style motifs including the hawk, hare, horned lark, birds, the use of chevron, and the moon-shaped faces with halos. However, some of these motifs seem to be more similar to their Rayy style counterparts such as the birds, hawk, and fox. The single and double stemmed dotted-plants are also Rayy style motifs, and the lack of background designs to fill the space and the sketchiness of the figures are also 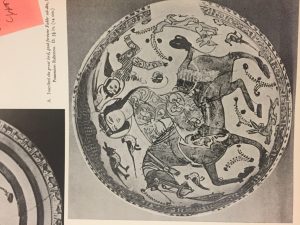 characteristic of the Rayy style.