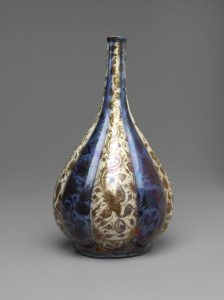 Lobed Bottle with Simurghs in Flight

This vertical striped, lusterware bottle was most likely used simply as a decoration, as suggested by the shape of the vessel.Towards the bottom of the bottle, around the foot, the lobes are distinguishable, however, they begin to blend around the neck of the bottle. The combination of white and cobalt glazes together, as seen within this piece, was common throughout Safavid ceramics; the white glaze was used often as a way to recreate the pure-white porcelain  seen in Chinese ceramics.

Upon the bottle are almost copper-colored markings (that appear black under the blue glaze), which provide both movement and elegance to the vessel. The images on this bottle lack a bit of volume and depth, suggesting that the artist intended for the bottle to be valued more for its decorative design. There are many floral designs scattered on the surface of the bottle as well, which surround these bird-like creatures with long flowing tails and long feathers around their heads. These are characteristics common of the Phoenix, the mythical bird-like creatures common in Islamic literature. The tails of these birds wind up towards the neck of the bottle in a repeating “S”-shaped motion. These Phoenixes are the largest design on the bottle, emphasizing their importance. Phoenixes typically have an omnipotent connotation, especially in the story “The Language of the Birds,” which provides reasoning for the artists choice to make the Simurghs the largest feature on the lobed bottle.