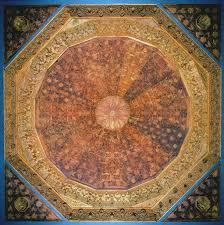 From the domed roof of the Palacio del Partal, one would see an early example of muqarnas decoration on the edges 16 wooden panels. The geometric vaulting structure, functions as transitional decoration element to deconstruct the slightly skew roof. The elements of the Muqarnas are in a downward-facing shape, Each cell of the muqarnas are shiny and gold. The doom roof is in good condition. No obvious damage had been found. It preserves all the original decorative elements including two layers of gold muqarnas assembled at the end of each panel. The flat wooden ceiling which still survives today above the porticoed hall of the Palacio del Partal makes use of same elements in its own harmoniously balanced two-dimensional design.

The muqarnas decoration characterizes the art and architecture historically produced in the lands ruled by Muslims, produced for Muslim patrons, or created by Muslim artists. As it is not only a religion but a way of life, Islam fostered the development of a distinctive culture with its own unique artistic language that is reflected in art and architecture throughout the Muslim world.[2]

The Palacio del Partal is the oldest palace of the Alhambra, the Nasrid royal residence above Granada. Of the Islamic building erected by Muhammad III in the early fourteenth century, only one hall survives, with an arcaded portico giving onto a long pool. Connected to this hall is a tower that in the nineteenth century, when the area was in private hands, was called the Torre de las Damas. It also forms part of the Alhambra walls and provides a unique view over the valley of the Darro and the city of Granada, which after its 200-year golden age was conquered in 1492 by the Christian monarchs of Castile and Aragon.

Islamic architecture is rooted deeply in mathematics and geometry. The wooden ceiling from this tower forms an incomparable ‘heaven’ above the ‘Moorish Cabinet’: at its crown is a sixteen-pointed star motif from which radiate sixteen trapezoidal panels, each composed of an interlaced framework whose interstices are inlaid with decorative elements, among them many eight-pointed stars. The carved inlays, picked out in golden colour, have scrolling tendril and leaf motifs or inscriptions with the Nasrid motto, ‘There is no victor but God’. This formula of faith in God is endlessly repeated on the sixteen-sided base with its characteristic muqarnas cornice, a decorative series of miniature niches. Here the geometric vaulting structure, muqarnas deconstruct the  transitional areas between the doom and the rectangular ceiling. Both repetitive and complex in structure it dazzles and contributes to create the illusion of heaven.

The ceiling panels illustrates the significant intellectual contributions of Islamic mathematicians, Each panel is decorated with inlaid wooden stars with four basic geometric shapes. The four basic shapes, or “repeat units,” from which the more complicated patterns are constructed are: circles and interlaced circles; squares or four-sided polygons; the ubiquitous star pattern, ultimately derived from squares and triangles inscribed in a circle; and multisided polygons. It is clear, however, that the complex patterns found on many objects include a number of different shapes and arrangements, allowing them to fit into more than one category.

Clearly, the decoration shows an early desire in the Islamic architecture to dissolve the barriers between the surfaces. In its repetition and complexity, it probably offers a  metaphor of infinite growth and can accommodate the incorporation of other types of ornamentation as well.