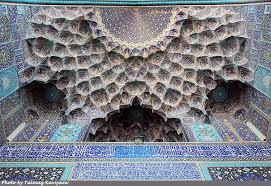 The geometric vaulting structure, muqarnas, is used for deconstructing zones of transition and for architectural decoration. It is a three-dimensional composition  built by assembling a variation of small prismatic elements, comparable to portions of vaults and composed according to precise rules, in overlapping levels. Although the chronology and geographical orIgins of the muqarnas are uncertain, it has been widely applied in Islamic architecture and decoration starting from the twelfth century.  It can be found on vaults, domes, pendentives, cornices, corbels, capitals This Muqarnas on half-dome, in particular, this architecture rich in geometric forms is part of the signature design of Shah Mosque of Isfahan, also known as Imam Mosque.

The Shah Mosque of Isfahan, Iran is one of the everlasting masterpieces of architecture in Iran (Figure 2). Ordered by the first Shah Abbas of Persia, the construction of the mosque began in 1611. Together with the construction of the whole Mosque, the muqarna decoration was created between 1611 and 1629. Muqarnas is usually associated with domes, doorways and niches, but it is often applied to other architectural features and is sometimes used as an ornamental band on a flat surface. In this case, the muqarnas was designed to deconstruct the space between the walls and the half dome of the iwan entrance to the Shah Mosque. The architect develop a system of muqarnase to enable a rather elaborated transition from the square base of the walls to the half circular dome. 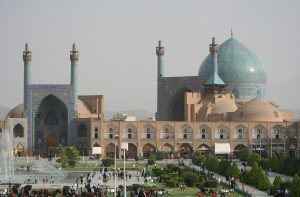 The muqarnas in the iwan forms a downward-facing, honeycomb shaped structure connecting the ceiling of the half-dome and the rectangle basis supporting the dome. Although at first sight it appears to be very complex, the muqarnas is a carefully planned system of projecting niches. It is a three-dimensional composition created by assembling, in a variety of combinations, simple prismatic elements, comparable to portions of vaults and composed according to precise rules, in overlapping corbelled levels (Garofalo 357). It consists of eight overlapping corbelled registers, joining elements of the same height. Similar to the construction of the Zisa muqarnas of Palermo, each register is created by the superimposition of two rows of sandstone ashlar blocks (Garofalo 359). One muqarnas consists of multiple tiers (layers) and each tier consists various basic structural elements (cells and intermediate elements). Each cell forms a three-dimensional pointed structure which looks like a small portion of a smooth vault. It belongs to the pole table style that was widespread in western Asia at that time. After all different shapes of cells were produced, they are attached to the architectural structure using ribs. The central pole table expanded from 4, 5, and 6 segments to 7 and 11.  Again the cell can be divided into facets and a roof, as the each side of facets intersects with the adjacent one. In general, the two identical intermediate elements in the shape of a triangle is placed between the roofs of two adjacent cells, while the disposition of such elements varies according to geographical location, the time period of construction, the part of the building they are applied, and the material used. Using the two dimensional pattern as a guide, one is able to find the arrangement of these elements was based on a repetition of geometric shapes. It achieves a dazzling visual effect to the spectacle by mirroring and correspond of the patterns. 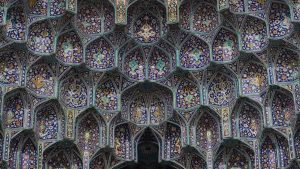 The three-dimensional composition looks rather complex because each register formed by assembling several same components on the same level and a variety of combination among the different levels. This type of composition often appears in the Eastern Islamic world, where the muqarnas is usually created through the repetition of same elements. 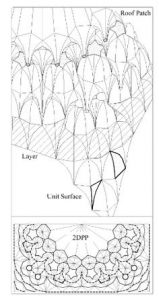 Also known as the stalactite vault, the Shah muqarnas hanging from the ceiling of the entrance gate is a form of architectural ornament which forms with geometric subdivision of a corbel, mostly dark blue, glazed tiles (Figure 4). The tile material gives a fine definition to details that shows the style consistency with the whole iwan entrance. These muqarnases are rich in decoration and have no strong structural function.  Each tile bears geometric patterns with floral designs: white flowers with gold vines around them. The bottom parts of the muqarnas forms a series of robin egg blue and gold five-pointed and four-pointed stars. Though the structures of the basic elements are simple and abstract, they all bear dedicated decorative patterns.

The development and multiplication of muqarnas cells beneath the dome can be understood by their function in reflecting and refracting light. In its repetition and complexity, the design becomes a metaphor of infinity. Here in Shah Mosque of Isfahan, glossy ceramic tiles are utilized, reflects sunlight to create a dazzling visual effect that glorify the king Shah.