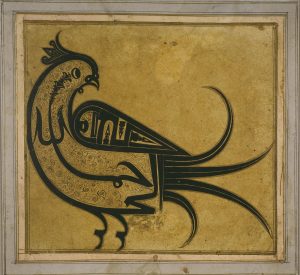 Calligraphy In The Shape Of The Hoopoe Bird

Calligraphy in the shape of the Hoopoe bird is a “calligram” or figurative imagery consisting of Arabic characters; this type of artwork was very popular in later Islamic calligraphy. This form of calligraphy was typically used in the field of Islamic mysticism, meaning it tends to have a religious affiliation.  Often it is words such as Allah, Ali, or the Islamic Bismillah phrase (the “basmala”), in particular, that are turned into representational images. This piece illustrates the ambiguity that is commonly seen throughout Islamic artwork, as the details within the work serve as both features of the bird and Arabic characters. Many of the characters are manipulated in order to clearly create the image of the bird. Upon the bird’s head is a crown of feathers, a characteristic of the Hoopoe bird, which was considered the leader bird in Farid al-Din’s story, “The Language of the Birds.” The Arabic writing in the bird translates to “in the name of God, Most Gracious, Most Merciful.” It makes sense that the artist chose to draw the characters in the shape of the Hoopoe bird because the Hoopoe bird encouraged the other birds of the world to follow him to the Simurgh for guidance and in order to escape their troubles. This idea could be connected with the Arabic characters, as God was believed to provide guidance for all people and help them through their troubles. The use of thick black script upon the gold folio definitely helps to distinguish the bird from the background and causes the image to become more visually engaging. Upon closer inspection of the bird, there are a variety of swirls within the image, which adds a bit more complexity to it.