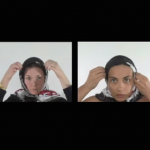 Tulu Bayar (Turkey, United States) Confluence United States (2005) 2-Channel Video Projection   Tulu Bayar’s Confluence encourages its viewers to think deeply about what it actually means to be Muslim in contemporary society. The video opens with two figures– one who appears to be white, who is clothed, and the other (Bayar herself) whose complexion […] 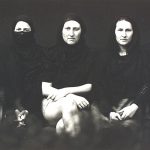 Jananne Al-Ani (Iraq, United Kingdom) Veil Union, London (1997) Single Screen Slide Projection   Jananne al-Ani’s work Veil aggressively portrays the ways in which the politicization of veiling practices influences a viewer’s perceptions of women. In this projection, al-Ani depicts five women of varying ages and backgrounds all dressed in black and set against a […] 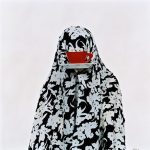 Shadi Ghadirian (Tehran, Iran) Like Everyday Series Tehran (2000) C-Print   Lighthearted, humorous, and serious at the same time, Tehranian artist Shadi Ghadirian’s Like Everyday series juxtaposes the past with the present through the lens of stereotypes. This allows her to comment on the contemporary portrayal and lifestyles of Muslim women in the midst of […] 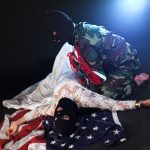 Sarah Rahbar (Tehran, Iran; United States) love Arrived & How Red Series  New York City (2008) Photograph   Love Arrived & How Red is a series of photographs named after a poem by the same title by the Iranian poet Simin Behbahani. The series draws upon the humanity of the individual in two widely different cultures […] 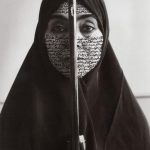 Shirin Neshat (Iran, United States) Women of Allah Series   New York City (1993-1997) Ink on Photograph   Shirin Neshat’s Women of Allah explores the intersection of religion, gender, and politics through a series of portrait photographs depicting women wearing chadors, covered in Farsi script, and carrying guns. The photo above, much like the other photographs […]

Shirin Neshat’s Women of Allah series explores the lines between religion, gender, and politics through a series of portrait photographs depicting presumably Muslim women, Arabic script, and guns. This photo, which comes from the series, is no exception. The audience is immediately confronted by the figure, who calmly yet confidently stares directly back at […]

In the history of Islamic art, the Abbasids play an important role in the standardization of many Islamic artistic media. It is claimed that “it is not until the Abbasid period that a distinct type and style of ceramic ware emerged that can be distinguished technically as ‘Islamic.’” To some extent, this claim is true. […]