With such an arid climate, it is no wonder that the Islamic world was fascinated by plants throughout history. Because the land cannot sustain much plant life it became a task to bring vegetation into everyday life. Artists found ways to incorporate flora and fauna into the culture in various ways. Through manuscripts, ceramics, decorative […] 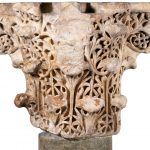 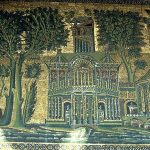 Patroned by Caliph Al-Walid Mosaics in the Great Mosque of Damascus Damascus, 701-715 Mosaic   The mosaics within the Great Mosque of Damascus, a congregational mosque for which the patron was caliph Al-Walid, depict a cityscape abundant in trees and vegetation. Each tessera was individually placed by Byzantine workers. The majority of the mosaic is […] 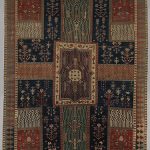 Garden Carpet Second half of the 18th century Cotton (warp and weft), wool (pile), asymmetric knotted pile Iran, Kurdistan Currently in the Metropolitan Museum of Art                   Plants held a place of great importance in Islamic culture. Gardens were another way in which Islamic culture could celebrate […] 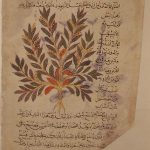 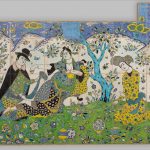 Garden Gathering First quarter of the 17th century Stonepaste, painted and polychrome glazed 41 x 74 x 2 ½ in Iran, Safavid period Currently in the Metropolitan Museum of Art   Gardens provided an environment for pleasure in the Islamic world. As Shah’ Abbas I transformed the city of Isfahan into his capital, he invested […]

The Museum with no Frontiers states that the Abbasid period is when the first distinctly Islamic style of ceramics was developed. This arose from the desire to create objects that imitate Chinese porcelain. Through this experimentation– for the Abbasids did not have the exact same materials as the Chinese– new glazing and decorating techniques were […]

Oleg Grabar states that Islam makes “the conscious attempt to relate meaningfully to the conquered word, by Islamizing forms and ideas of old.” By this, he means that, for Islam, it was important to show dominance as a new culture and religion by taking aspects of older cultures and making them “islamic”. This could have […]

The digital exhibition The Umayyads claims that the Umayyad period in Islamic history was one that employed many different motifs and decorative styles from a variety of different places. On the front page of the exhibition the curators say, “Umayyad art is a combination of decorative styles of motifs drawn from different artistic traditions.” While […]