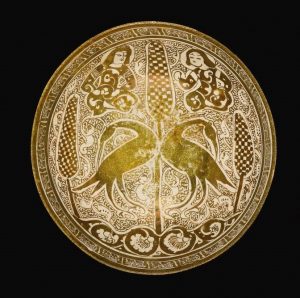 This monochrome bowl depicts two silhouettes of swan-like animals, facing away from each other, yet connected at the breast. At the bottom of the bowl are four broad leaves with lines on the inside coming from the leaf base and dots at the end of the lines. They are against a solid background with a white line creating a border between the rest of the bowl. Three (two on the sides and a larger one in the middle) checker board cypress trees rise from the border, towards the top of the bowl, the third touching the edge. Two people sit at the top of the bowl between the checkered cypress tree, wearing garments with foliate scroll. The border is broken into blocks with the same scroll design in each block. The background is filled with scroll and leaf motifs.
The checkered cypress tree motif is often used diagnostically to identify Rayy style pieces. Nevertheless, the piece contains characteristics of the Kashan style such as the scroll and foliate designs that fill the space, and motifs such as the leaves at the bottom of the piece.