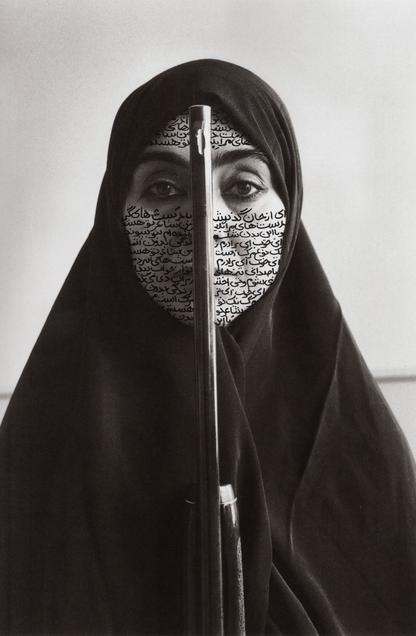 Shirin Neshat’s Women of Allah explores the intersection of religion, gender, and politics through a series of portrait photographs depicting women wearing chadors, covered in Farsi script, and carrying guns. The photo above, much like the other photographs from this series, discusses the politicization of the body through the politics of Islam and the symbolism of the gun and the veil.

There are four main visual elements in this photograph: the eyes, the script, the veil, and the gun. First, the eyes serve as the focal point of the photograph. Neshat places the figure directly in the middle of the frame and directs her eyes at the viewer. The expression on the face of the woman, most clearly seen in the expression of the eyes, is calmly aggressive. The eyes themselves are heavily lined in makeup; furthermore, they are the only part of the figure’s body that is shown without obstruction and is not covered by clothing or text.  All of these elements put the figure in a position of direct confrontation with the viewers. This seems to engage the viewers’ attention by forcing them to consider their own gaze. It is in the makeup and the expression that the viewer can infer the femininity of the figure, though this femininity is blurred by the perhaps masculinized, militant nature of her gaze. In this way, the eyes convey the figure’s confrontational attitude and gender her. At the same time, to reserve the eyes as the only part of the body not obstructed from the viewer makes the eyes the only element in the piece that seems human, drawing the viewer’s attention prominently to them as the only sign of life in the photo. They are direct, but they are also quite calm; the figure is not passive nor is she completely combative; ultimately, her eyes affirm her humanity.

Looking outward from the eyes, the next thing the viewer’s attention is drawn to is the Farsi script scrawled across the figure’s face. This detail was added by hand in ink after the initial photograph was developed. The text is derived from old Persian poetry describing ideas such as femininity and martyrdom.The way in which the text is inked over her face gives the illusion that perhaps the text is tattooed onto the figure and is in fact an actual part of her person. The subject of the text provides a narrative that clearly fits into Neshat’s conceptual framework. Neshat’s audience, however, which is primarily comprised of English-speaking Americans, would not necessarily be able to read the script or comprehend its meaning. This element of the photograph relies on the audience’s previous knowledge to influence the way in which it is interpreted. The only interpretation many audience members would likely be capable of offering is that the text is likely some sort of “Middle Eastern” script, and other visual clues in the photo (i. e. the chador) would likely lead the audience to expect some sort of religious meaning from the text. As a result, the text serves as a symbol of religion and its practice for those who do not read Farsi and as a rich conceptual detail for those who might. The apparent reference to tattooing is also significant. While tattooing practices are typically considered transgressive and destructive by devout Muslims, as it is by most religions, a secular Western audience might read the act to be masculine and aggressive. For “Eastern” or “Islamic” viewers of this work, the tattooing reference might seem like a deviant act that makes the woman in the photo seem more aggressive and counter-cultural; it also might simply Westernize her persona, making her body a symbol of Western practices, ideas and stereotypes instead of one that embodies the Muslim identity. For Westerners, the metaphor of the tattoo– the idea that one is permanently scarring one’s body with an image of something of great significance to the individual– makes the Farsi text about martyrdom an important element in the existence of the figure in the photograph. By associating her with tattooing practices, a certain strength of character and dedication is metaphorically implied, transfusing her expression with a more coarse and martial attitude.

The next political marker for the figure is the veil covering most of her body. The chador as a symbol is very carefully used in this context. The black chador provides stark contrast with the pale, text-covered face of the figure, yet it does not cover her face completely; contrarily, it serves as a framing device and draws attention inward to the figure’s face and her eyes as well as the gun. It also formally provides enough definition to define her body as a body but then obscures the rest of her form. The veil is one of the most obvious symbols of Islam in modern culture. In the West, there has been a frenzy of stereotyping that has profoundly altered the discourse surrounding the veiled bodies of Muslim women; the Western interpretation of veiling is that veiled women must either be oppressed and their bodies forcibly politicized or highly sexual individuals alluringly and mysteriously hidden from society. As a result, the veil in the West usually makes the women seem weak and helpless or overly mysterious and sexualized. In this photograph, however, Neshat is able to deny these stereotypes in a very direct way. The figure’s facial expression and eyes are the primary method of communication through which her militant strength and conviction as well as her femininity are portrayed; the veil, in the staging of the photograph, becomes a secondary element. It does not give the figure’s body detail in shape or sexual allure. Rather, it obscures her form and frames her strength. While the veil is a feminized article of clothing, Neshat, in this way, is able to politicize the veil through denying stereotypes and forcing her audience to treat the chador as a secondary part of the figure, not simply as a definition of her situation.

Lastly, and most alarmingly, the figure is holding a gun that bilaterally dissects the figure’s face. Visually, the shiny metal of the gun contrasts with the figure’s face in color and in texture. It also carries the eye upward from the veil to the eyes, serving to further emphasize this part of the figure’s body. The way the gun is situated, its shape seems to blend into the folds and details of the fabric of the chador. Symbolically, the gun is representative of strength, violence, and masculinity; it most definitely gives the photo an aggressive quality that, when paired with the direct expression of the figure and the “tattooed” text across her face, makes the photo seem angry and militant. When contrasted with the direct yet calm gaze of the figure, the narrative of the photo begins to take on a new personality. Most interestingly, however, the blending of the gun into the chador seems to make the gun a physical extension of the veil. If the veil is a symbol of Islam, perhaps Neshat is saying that Islam as religion, Islam as politics, and Islam a militarization are all one in the same.

All of these factors work together to serve a greater conceptual purpose. They highlight the ideological conversation with the viewer Neshat wants to have in the piece. It is obvious that Neshat is engaging these details in a commentary about Islam as an identity more so than a religious belief. On one hand, the gender of the figure (female), the intellectual allusions of the Persian script to religion, femininity, and martyrdom, and the reference to veiling make this piece about the gendering and politicization of the female body in Islam. Because veiled women are so often portrayed as either helpless or overly sexual, Neshat makes a conscious effort to break away from stereotypes, making it known that she feels that Muslim women are strong, intelligent, dedicated, and confident. This idea is only further emphasized by the presence of the gun, a symbol of strength as well as a reference to women’s vital role in the fight centered around the Iranian State. On a deeper level, however, Neshat seems to be alluding to the ways in which Islam itself has become militarized and politicized. By using religion as a purely visual element and extracting religious observance from the work– making the chador blend with the gun; alluding to tattooing; referencing religious martyrdom and religious scripts that, for her audience, have little significance or meaning– Neshat is able to politicize and generalize the identity of Muslims. Her figure, while distinct and strong, is obscured in such a way that the excessive covering of the body provides a layer of ambiguity. By overwhelming the figure with excessive references to politics and militarization, she becomes more generalized as a person and becomes a sort of political object herself.

At the same time that the gun gives the gender and character of the figure a confrontational quality, it also carries its own aggression that is notable for referencing and critiquing militarization and the politicization of Islam, an issue Neshat talks about in many of her works. The gun seems to reference stereotypes that came about in the eighties and nineties as a result of the wars in Iran. Many non-Muslim individuals outside of Iran, especially in America, seemed to jump to the conclusion that the gun was a reference to terrorism and radical religious violence. Neshat was highly aware of this reaction and exploited it in her photo, ultimately drawing into conversation the way those in the West– her primary audience members– view those in Islamic cultures. By juxtaposing a series of symbolic elements with such significant multiple meanings, she is able to engage her audience in a way that sparks a discussion about the line between religion and politics, militarization and intimidation, and gender as it exists in both the East and the West today.