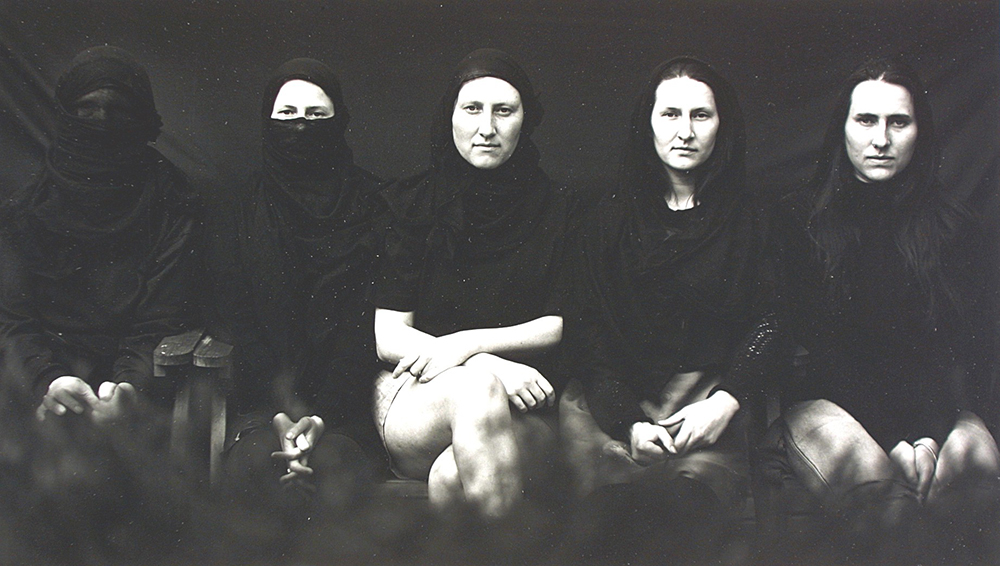 Jananne al-Ani’s work Veil aggressively portrays the ways in which the politicization of veiling practices influences a viewer’s perceptions of women. In this projection, al-Ani depicts five women of varying ages and backgrounds all dressed in black and set against a black background. They sit in a straight line across the screen, staring blankly back at the viewer. The frontal placement of their bodies confronts the viewer with their authority, and this strong and aggressive quality sets the tone of the piece as it unfolds. As the viewer continues to watch, the women on the screen are veiled and then unveiled, all in staggered intervals of time. The only parts of the women that are visible are those where skin is exposed; as the women are veiled, the black veils themselves blend into the black background. As a result, the women seemingly appear and disappear throughout the work, the only trace of their existence becoming their eyes (as the women are veiling themselves with a niqab or hijab, their eyes are constantly exposed).

The figures seem to exhibit no emotion; as a result, the gesture of the gaze made by the women is what the viewer is forced to grapple with. By constantly exposing the eyes of all five women, this gaze between the figures and the viewers is never broken.

The veil carries many stereotypical connotations throughout the world, especially in the West. Many people believe that women who wear the veil are either oppressed, culturally backwards, ignorant, inferior, and helpless, or they are overtly and excessively sexual beings that carry a sense of mystery and allure with them constantly. When the figures in this work become veiled, these stereotypes are suddenly imposed on them; what was once a seemingly random woman with no political, religious, cultural, or social associations for the viewer becomes a figure laden with political and gendered discourse. In other words, the process of veiling itself politicizes the identities of the figures by imposing the stereotypes associated with the veil and modern ideas about Muslim identity onto these women.

At the same time that these women are forced into stereotypical associations, however, the continuous confrontational essence and lack of outward emotion given off by these figures implies that these women are not victims; instead, they are blank canvases or mirrors, reflecting instead of absorbing the politicization and incorrectness of these stereotypes and forcing the viewers to confront their own perceptions of what it means to be Muslim. Through expressing the political nature of the veil and the Muslim identity through the act of veiling and unveiling, Al-Ani is able to reflexively show the viewers that perhaps their own deep-seated stereotypes of perception are skewed and should be reevaluated.