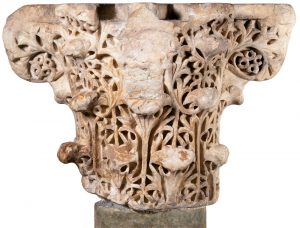 This capital from Córdoba, Spain, was originally from the palace of Madinat al-Zahra, just outside of Córdoba. This palace was originally built by a member of the Umayyad dynasty in Spain. Much of Islamic art and architecture looked to other cultures as inspiration, as seen here in the influence of Roman capitals.

The Roman Corinthian order of is the third order used in ancient Greek and Roman architecture. The column capitals are the most iconic symbol of the Corinthian order and are characterized by tri-level acanthus leaves, as seen in the capitals of the Temple of Olympian Zeus in Athens, Greece.

Within this column from Spain, there are indications of the influence that Roman and Greek architecture had over Islamic architecture. There are three levels of leaves that stick out from the main portion of the capital, evoking the three levels of the Corinthian columns. However, in this capital, the leaves are farther apart and more abstracted in the way that the scrolls of carved marble lead up to each of the protrusions. This column also differs from those of the Corinthian order in that holes are carved into the column, creating another level of depth. Because of these holes the scrolling vines of the decoration appear to be sitting on top of the column.