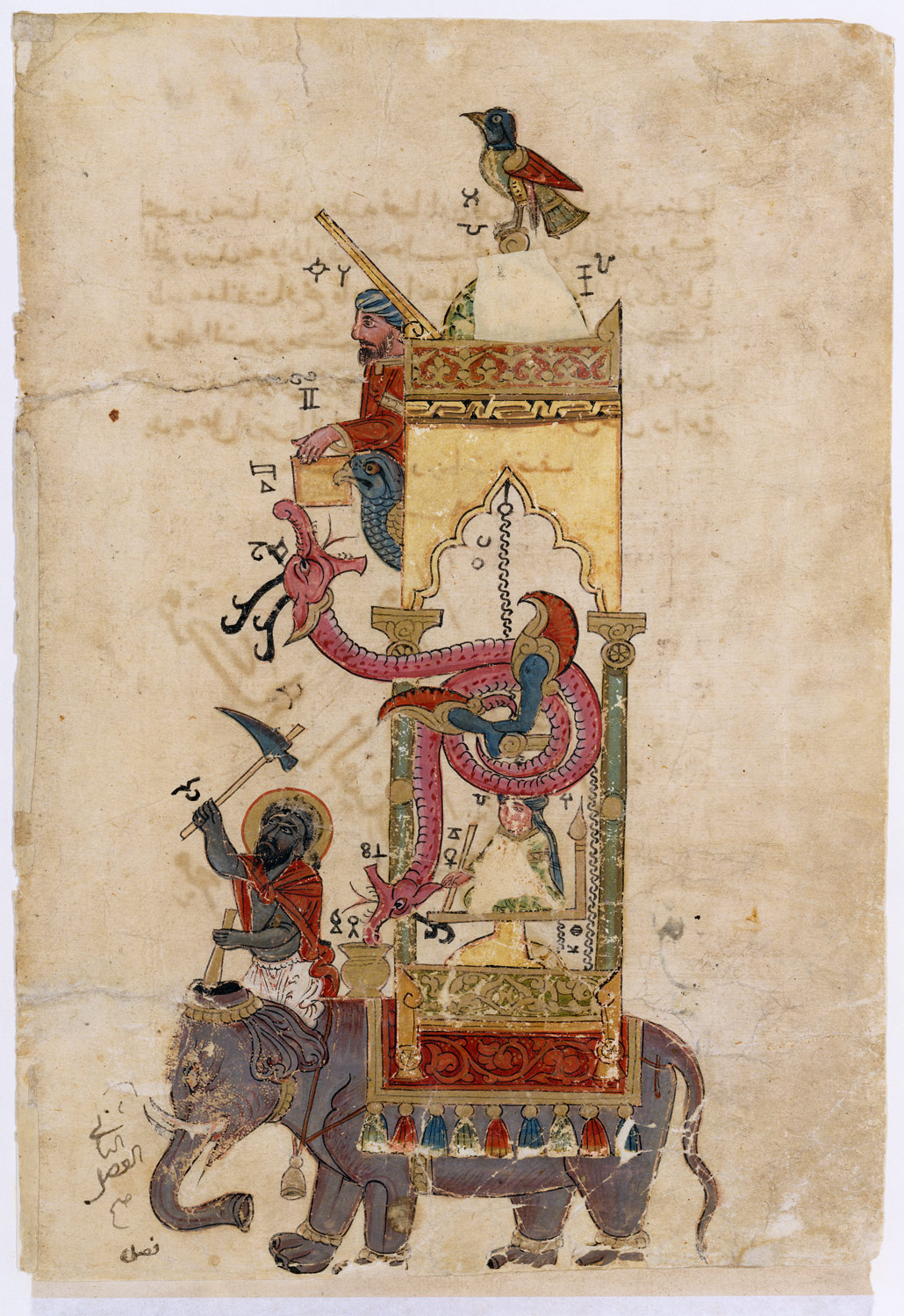 From: The Book of Knowledge of Ingenious Mechanical Device

The Elephant Clock by al-Jazari is a folio page illustrating how to create a fantastical water clock. His attention to detail and instructional lay out acts as a visual manual. This folio was illustrated using ink, opaque watercolor and gold on paper. The illustration is arranged vertically on the page, it’s background inscribed with nakshi calligraphy written in faded brown ink. The ink is so light that it is barely legible on the tan parchment. Iran pioneered thin parchment, an ideal material because it absorbed ink better than papyrus.

We see the use of blue, yellow or gold, grey, green, brown, and red. Color has incredible significance in Muslim culture. Blue is traditionally a color for protection. Green is associated with the faith of Islam itself, as well as nature and life. Green and gold are the colors of paradise. Red and yellow are associated with ancient Arabian civilization. Black represents holiness, associated with the Ka’aba and white symbolizes purity and cleanliness (Color).

The three human figures have different skin tones, representing the multiethnic population of the Muslim Empire in the 13th century. The man atop the Howda has light, reddish skin and the squatting man sitting on the elephant also has light skin, although fairer in complexion. The elephant driver is almost blue-black. He could possibly be a member of the Berber tribes, a darker-skinned nomadic people who occupied North Africa. His yellow halo with red trim could indicate a Christian origin. Costume and dress are significant indicators of a figures rank or character. The dark skinned man wears a white cloth as trousers or skirt. His shoulders are wrapped in a crimson red cape. Similarly the man up in the top of the Howda also wears red, though his type of dress is more distinguishable with its yellow trim. He wears a turban, or kufiya. The other turbaned figure, although the paint is chipped away, seems to be wearing green. The dark skinned man reveals the most skin of the three, perhaps indicated his lower or working class status.

By the end of the 1200’s, after the Mongols invaded from the East, the influence of Chinese ink paintings appeared in Islamic styles (Islamic Art). Most Islamic illustration remained essentially ornamental, uniting many design elements into an intricate pattern. For example, the Persian carpet is painted red with a floral and vine design common in Muslim textiles, but the light, slowing brushwork could be traced to Chinese roots.

Rather than complex shading, a think black line is used to represent separation between forms and details within. Key evidence of the artists’ detail work can be seen in the elephant’s ear, scales and feathers and the folds of the clothes. The ink lines are more stylized than realistic— the feathers are basic semi circles and the elephant’s ear looks more like stylized water than craggy wrinkles. Both the animals and humans are boxy and very flat, and there is no sense of background or depth.

This page exemplifies the draftsmanship capabilities of the era, as well as the artist’s goal to represent all cultures of the Muslim in his work that ultimately celebrated Islamic ingenuity and creativity. This illustration succeeded in explaining a scientific text while simultaneously using imagery to add to the pleasure of reading.

The purpose of the work is to discuss the historical context behind the commission and creation of Jami’ al-tavarikh (Compendium of Chronicles), the format of the illustrations, and the history of the author of the manuscript. The authors state that currently only two early-14th century Persian copies of the Jami’ al-tavarikh and part of one Arabic copy survive. These narrate the history of the ancient Iranian and Arabian rulers, the prophet Muhammad and the caliphs, the Jews, the rulers of Iran, the Franks, the Indians, and the Chinese. This diverse crossover of artistic styles transformed existing models that would be influential in the development of Ilkhanid painting. I chose this source because it exhibits the history of different represented cultures seen in “The Elephant Clock.” It also reflects the importance of the written word in Muslim culture, and how a manuscript of such descriptive and artistic depth like Jami’ al-tavarikh would not have been considered unusual for it’s time.