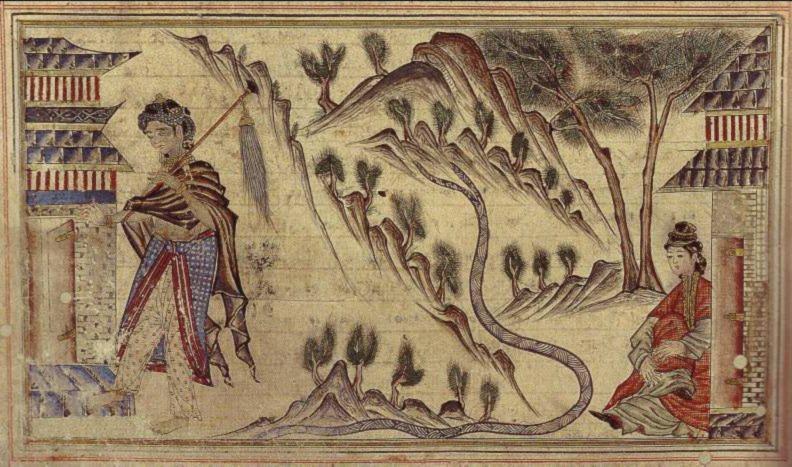 The Mountains Between India and Tibet From Jami Al-Tavarikh also features a Mongolian Indian figure, their religions symbolically divided by a snake-like river. It was drawn between 1314-1315 using ink, color, paper and gold. The text was originally Persian, but later translated into Arabic (Adamjee). The paintings from this manuscript are typically narrow and horizontal in format. They draw reference from pre-Mongol Persian and Arabic texts, Chinese writing and art, and even Byzantine manuscripts. The artists of Persian manuscripts transformed existing models of manuscripts to create entirely new compositions. These advancements in style would eventually influence the development of Ilkhanid painting.

We see a Mongolian figure, recognizable by his clothes and stylized facial features. He wears light white trousers and an open skirt with a dotted blue fabric with red stripes. His torso is wrapped in a large blue cloth. He wears a traditional pointed Mongolian hat, a jajin,with white beads, possibly indicating wealth or nobility. The depiction of Indian woman is influenced by the East Asian style of depicting fair-skinned, almond eyed women. One of the few hints at her cultural heritage is her red sari. Her appearance seems lighter and more East Asian than the brown skinned Indian women in Bahram Gur.

The Mongolian man and Indian women are indicated by their dress, just as in the Elephant Clock, the Arabic figures are also recognizable by their clothes. While Mongolia is not directly represented in al-Jazari, India is represented in the illustration. India was significant to Muslim empire for their trading of textiles, silks, spices and metals. This work exhibits a bridge between the history of Muslims in pre-modern and recent Central Tibet, and to give a perspective on future developments Tibetans came in contact with Muslims, in the beginning, mainly through military activities. While the focus is more on history than on art, it still helps inform the connection of Asian and Muslim people, and how they traded art styles and imagery.

Adamjee, A. S. (n.d.). Folios from the Jami’ al-tavarikh (Compendium of Chronicles) | Essay | Heilbrunn Timeline of Art History | The Metropolitan Museum of Art. Retrieved 2017, from http://www.metmuseum.org/toah/hd/khan8/hd_khan8.htm