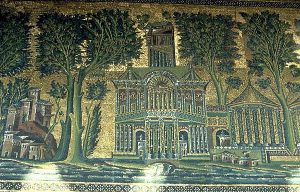 Mosaics in the Great Mosque of Damascus

The mosaics within the Great Mosque of Damascus, a congregational mosque for which the patron was caliph Al-Walid, depict a cityscape abundant in trees and vegetation. Each tessera was individually placed by Byzantine workers. The majority of the mosaic is either gold, as seen in most of the background, which evokes a sense of otherworldliness, or green, as seen in the buildings and plants. This green makes the scene appear lush and full of life through the use of one of the most popular colors in Islamic art.

One interpretation for these mosaics is that it represents the city of Damascus itself. The more widely accepted interpretation of these mosaics is that they represent Heaven, or Paradise.  A river, seen on the lower part of the mosaic, divides the viewers from the houses and buildings that are depicted. Each building is ornately decorated with columns and pavilions and the background color of gold that dominates most of the mosaic comes through in the buildings to enhance the decoration. The trees found throughout the scene are twice as tall as all of the buildings. Each tree is blooming with an abundance of leaves. The use of gold combined with the beauty of the green creates an idealized city. Beauty such as this could only have been found in Paradise, as discussed in passages in the Quran.