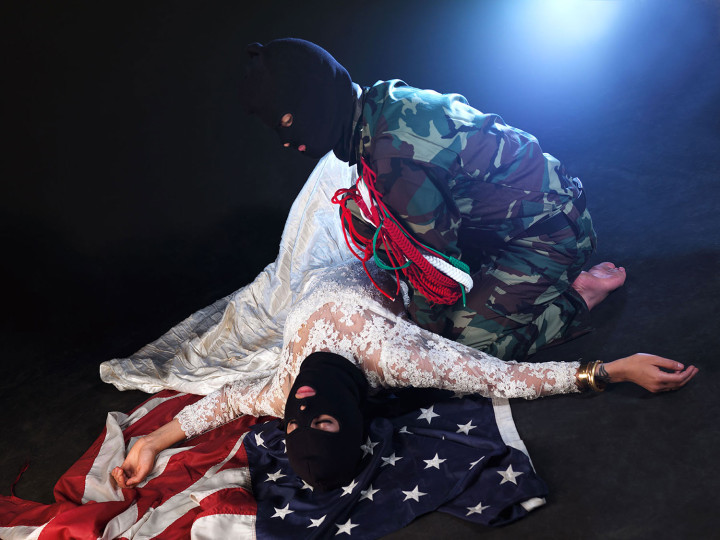 Love Arrived & How Red is a series of photographs named after a poem by the same title by the Iranian poet Simin Behbahani. The series draws upon the humanity of the individual in two widely different cultures as it surrounds one common character: the soldier. Perhaps the most unnerving aspect of these photographs is the anonymity and mystery each character has as a result of the black “bank robber” ski masks that obscure the identities of the figures while giving them an unsettling, almost eerie quality. The first several photos depict a couple: a masculine figure, wearing the typical camouflage soldier’s uniform, and a feminine figure, wearing a headscarf (or, in some of the images, a large headpiece) and a long tunic. The female figure’s clothing is overwhelmingly colorful. The headscarf, headpiece, and tunic are all likely derived from traditional Iranian wedding customs in construction.

The last several photographs are quite similar; the male figure, still donning his camouflage uniform, is juxtaposed with another female figure, only this time the figure is wearing a white wedding dress and a wedding veil made from an American flag. The first figures in the Iranian garments are much more confrontational than those in the American ones, who seem quite sad and pensive. The last two photographs are much more dramatic than those in the first half of the series, as they show the second female figure, still in her wedding dress, lying lifeless across the ground. In the penultimate photograph, she is lying in the arms of the soldier, draped across an American flag. In the final photograph, she is alone and surrounded by pomegranates, typically a symbol of abundance, fertility, and success but in this context an apparent reference to blood.

These photographs tell a narrative. We see a transition from strength and stoicism to passivity and distant sadness as we go from the Iranian couple to the American couple, both seemingly on their wedding day (a day which commemorates love and kinship). We finally are met with love’s death in the end. This story draws a comparison between America and Iran, which are ultimately two cultures that are far more similar than they are different. People in both countries experience two kinds of love: love of fellow man, and love of country. By dressing the male character in the same soldier’s uniform throughout the series, Rahbar shows the ways in which the identity of “soldier” is one in the same between cultures in spite of war, religion, and politics.

By creating a story of love as manifested between people and in nationalism and by drawing the similarities between love in various cultural contexts, Rahbar is able to depict love’s end in a much more dramatic, poignant way as she reflects on the implications of the corruption of war. It is as the poem says, “Love arrived and how red?/ Although it is too late.” According to Rahbar, corruption, militarization, and violence ultimately lead to love’s death. The commentary made in these photographs is that love of country ultimately seems to trump love of humanity. The identities of these figures, through the anonymity provided by the ski masks, depends completely on the visual language of nationalism and cultural identity; the viewer clearly recognizes the first five photographs as “Iran” or “Middle East” and the last five as “America.” The figures become dehumanized by this obscuring of identity. This, paired with the spilled blood of conflict celebrated in the notion of nationalism, ultimately leads to love’s corruption and death at the end of this narrative series. Rahbar is able to demonstrate how the politicization, nationalization, and militarization of identity blinds individuals from their own humanity and instead leads to love being surmounted by death.