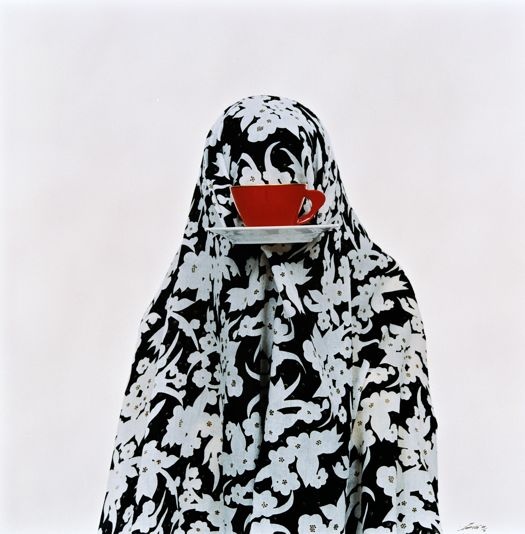 Lighthearted, humorous, and serious at the same time, Tehranian artist Shadi Ghadirian’s Like Everyday series juxtaposes the past with the present through the lens of stereotypes. This allows her to comment on the contemporary portrayal and lifestyles of Muslim women in the midst of the politicization of their identity.

In the photographs, Ghadirian uses decorative fabric to suggest the form of a veil, here presumably a niqab or chador, by sculpting the cloth in such a way that it appears to be wrapped around a figure, who is not shown. The fabric itself is adorned with dense and boldly patterned floral decoration; these fabrics seem to reference floral tablecloths. The references to homemaking are further emphasized by Ghadirian’s use of everyday household items in place of human faces. She places these items– a teacup, an iron, a broom, a rubber glove, a pan, etc.– where the viewer expects to see a face within the veil.

The visual language used here references the expectations of the feminine “homemaker” seen throughout the twentieth and twenty-first centuries. By using a tablecloth as a kind of veil, Ghadirian highlights the way that Muslim women are viewed as subservient and submissive. However, this juxtaposition also emphasizes the idea that this view is not simply one reserved for Muslim women but instead can be found in ideas of femininity and the politics of the female identity in multiple cultural contexts. This comparison deconstructs the assumptions made by the viewer that the veil itself is causing the stereotyping of identity when in reality these stereotypes are a phenomenon found in multiple cultures, not just in those that practice Islam. This allows Ghadirian to differentiate between religious beliefs and a secularized, social identity. Furthermore, the objects, associated with housework and the homemaker, seem to become the “face” of the figure. They serve as an abstraction of identity, consciously making the assumption that female identity is tied to housework and its associated stereotypes of submission.

The juxtaposition of what is perceived as Islamic, here being the veil, and what is perceived as Western, including the household objects and the tablecloths, comically suggest that perhaps these motifs are more connected than one might think. Ghadirian, as a result, creates a narrative of the female experience in Islam versus the universal experience of women between cultures. She compares the stereotypical expectations of women in Islamic culture– veiling and passivity– and in Western culture– the epitome of the housewife– in order to portray the ways in which these stereotypes, in their actual realization by these cultures, affect the ways in which the identity of the Muslim woman is politicized and isolated. This is done so in a way that does not respect the greater conceptualization of the female identity in multiple cultural contexts. Ghadirian is able to show how Islam and its associated identities are not isolated or problematic in unique ways.