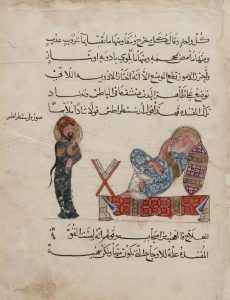 From: De Materia Medica of Dioscorides

Greek Physician, Erasistratos with an Assistant is folio page featured in Dioscorides’ De Materia Medica of Dioscorides (ca. 1224 CE). Early Greek medicine had a huge influence on Islamic medicine. Dioscorides, a Greek doctor and apothecary, was considered the father of pharmacy. His work was frequently referenced by Turkish and Islamic scientists in their own academic writing. This manuscript exemplifies the transfer of knowledge across centuries and different cultures. During the times of ‘Abd al-Rahman III (891−961), the caliph of Cordova, the De Materia Medica was translated into Arabic. This Spanish-Arabic edition of the manuscript features 600 images depicting plants, animals, and images of human figures. Precise details about the engraver are unknown, but the text was translated by calligrapher Abdallah ibn al-Fadl.

Muslims used the ancient techniques of the Greeks to advance their own empire, building up on previous medicinal and technological advancements. This illustration shows the transfer of knowledge from Greek tradition to Muslim culture. The influence of Greek invention is a critical part of The Elephant Clock’s functionality. The water clock was supposedly first attributed to the Greeks, a technological advancement far more accurate than the sundial. And like the text of The Elephant Clock folio, the Arabic in  De Materia Medica of Dioscorides is written in black naskhi script.

The folio features two men, one turbaned with long black hair, the other older with white hair. They sit within the lines of kufic script. The Greek physician Erasistratos is the older man lounging on a lifted platform. He rests his head on a pillow while at his feet sits a books propped open with two planks of wood. His assistant, the black haired man in a red turban, approaches him. These two Greeks are depicted as Middle Eastern, as evident in their dress, hair styles, and the lavish, geometric decoration of the textiles. With the translation of the language, the illustrator also chose to reinterpret the culture.

Featured below are folio pages from two other Arabian translations of De Materia Medica of Dioscorides. The Iraq/Syrian folio also shows the figures in the dress of the culture of the translator. However, the Vienna Dioscorides, an early 6th-century Byzantine Greek illuminated manuscript of De Materia Medica, depicts Dioscordes as Greek. He is dressed in a white toga, speaking to a woman in a Greek Chiton. This Byzantine-Greek copy was used as the original to make copies from, such as the Arabic edition of Abd al-Rahman III of Spain. 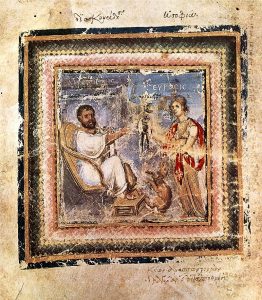