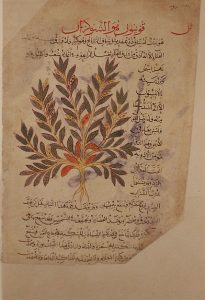 Folio from the De Materia Medica of Dioscorides

Currently in the Metropolitan Museum of Art

This folio shows more clearly the typical page of Dioscorides’ De Materia Medica. Dioscorides was a physician in the roman army and was responsible for creating an herbal that he wrote in Greek. This same herbal has been translated many times into Arabic, demonstrating the importance of the study of plants in Islamic culture.

Within this page there is a central plant which the inscription calls “Thamt” but it is sometimes referred to as the “killer of wolf” (The Met). This plant is shown in its entirety– from roots to the tips of leaves. Although rather flat on the page, the anatomical structure of the plant is naturalistic. It is also painted in such a way that it follows the common Islamic trend of symmetry. While not perfectly symmetric, the left and right side of the plant essentially mirror each other. This makes the page both informative and decorative.

The inscription envelops the illustration of the plant and gives the reader some basic information on the uses. This plant is said to “kill flies for if it is placed in raw meat and the flies eat the meat they are killed” (The Met). This plant may not have direct benefits for the health of humans but it is possible that the killing of flies was something that increased the quality of life of the inhabitants of Iraq. Plants had various uses and were important in the Islamic world.