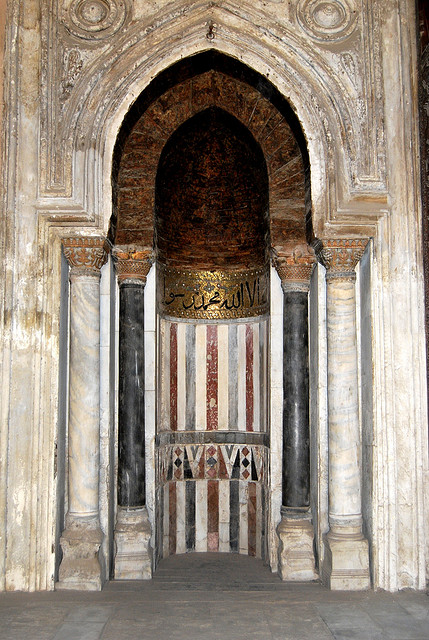 Mihrab of the Mosque of Ibn Tulun 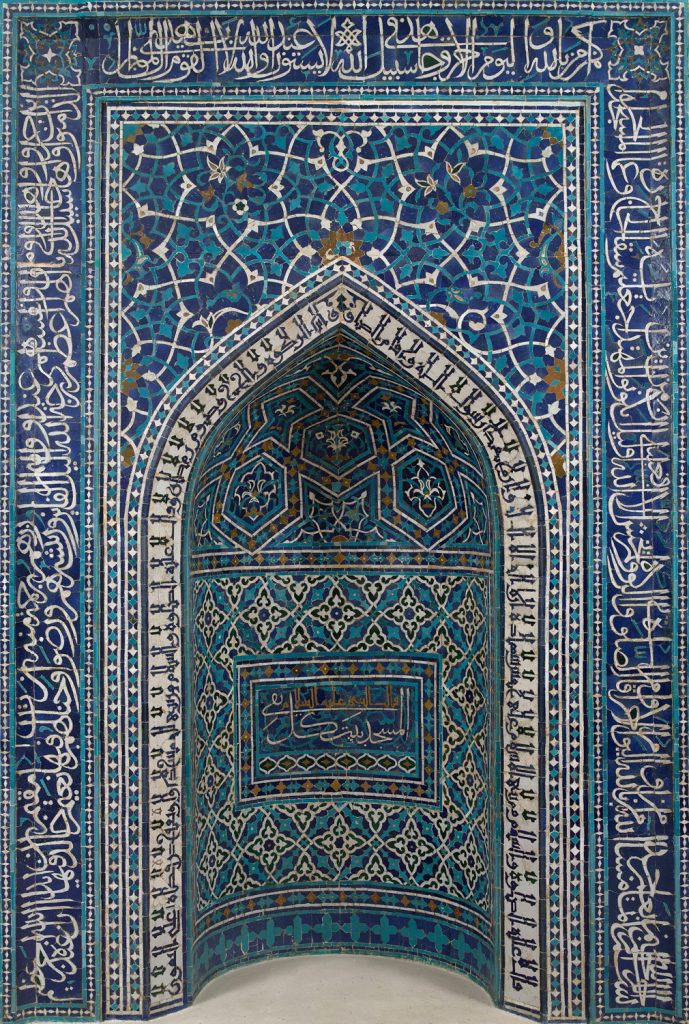 Mihrab from the MET 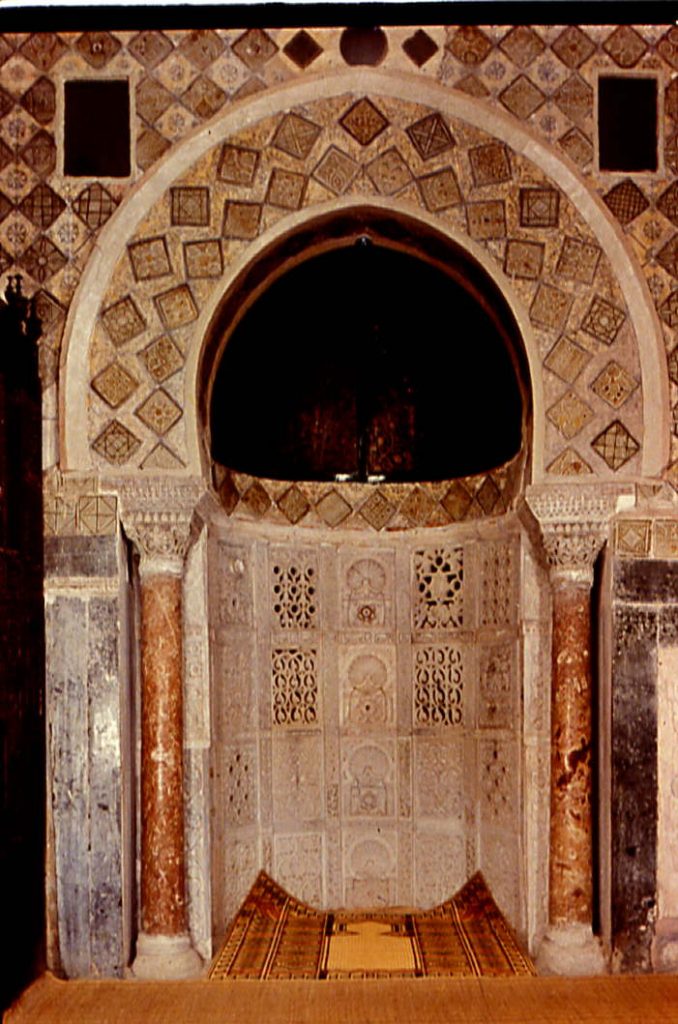 Mihrab of the Great Mosque of Kairouan 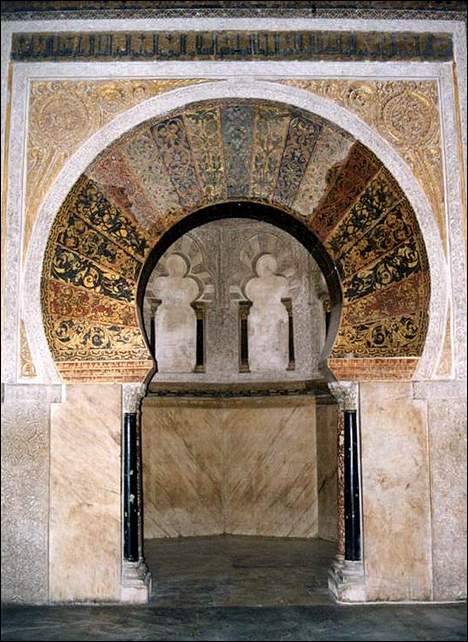 Mihrab of the Great Mosque of Cordoba 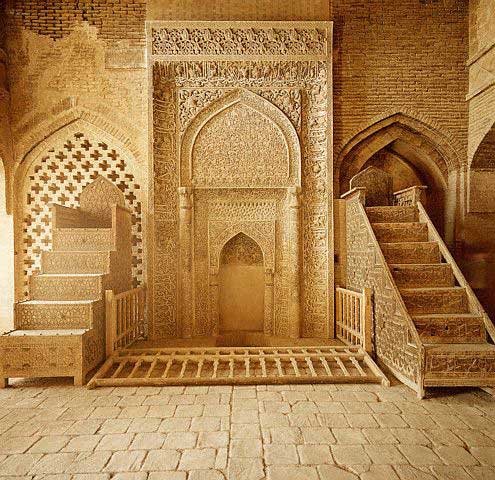 Iwan/Mihrab of the Great Mosque of Isfahan

Located in a mosque or Islamic place of prayer, the mihrab is a niche in the qibla wall which faces Mecca–which Muslims must face during their daily prayers. Originally, Muslims prayed towards Jerusalem. The third holiest city in Islam, Jerusalem is believed to be where Muhammad was lifted to the seven heavens where he received visions of other prophets, including Adam, Jesus, and John the Baptist. The opposition of Jews to the Prophet Muhammad led to the change of the direction of prayer to Mecca. Considered the most sacred city of Islam, Mecca is the birthplace of the Prophet Muhammad, the holiest prophet of Islam. Mecca is also the location where Muhammad received the holy word of God, to be written to form the Quran. This city is also where the Kaaba is located which is considered to be the “Sacred Mosque”. It mandatory for all Muslims, as the fifth of the five pillars of Islam, to travel to Mecca at least once in their life. Therefore, it is stated in the Quran that all worshippers must face Mecca during prayer.

The marble panels from the lower portion of the mihrab of the Great Mosque of Kairouan are from Syria, while the tiles surrounding the mihrab, were imported from Baghdad. This was the first known use of lustrous tiles within a mosque. The shape of the dome of the Great Mosque of Kairouan, as well as the inclusion of the dome over the mihrab, can also be seen as influential to the architecture of Bagdad. The Khassaki Mosque in Baghdad, while constructed in the 8th century, is also composed of shell hood over the niche resting on a pair of columns, therefore closely resembling the composition of the mihrab of the Great Mosque of Kairouan. The mihrab of the Khassaki Mosque also demonstrates a link to Syrian architecture, as it was constructed in Syria and then moved to Baghdad. The Great Mosque of Kairouan also displays a strong Roman, Byzantine and Umayyad influence through the use of spolia capitals flanking the mihrab and the dome to illuminate the mihrab. The designs of the tiles also bear a strong resemblance to Byzantine and eastern Islamic works through their intricate swirling vine patterns. These importing of foreign decorations demonstrate a strong influence of outside cultures within Kairouan, as well as the high levels of trade and communication and attention to art and architecture within the Islamic world.

The oldest mosque in Cairo in its original form, of the Mosque of Ahmad Ibn Ţūlūn, constructed in 879 AD demonstrates that the lavish decoration of a mihrab constructed during the Tulunid Dynasty. The mihrab of the Mosque of Ahmad Ibn Ţūlūn is composed of marble, stucco, brick and different colored tesseri. The mihrab is flanked on both sides by two columns with basket-weave capitals. It is decorated with color stones forming vertical stripes. The stripes alternate gray and red stone with white stone between each of the colors. This stripes lead to the focal point on the upper third of the interior of the mihrab, kufic script inlaid on a large golden mosaic band. This golden band is lavishly framed by a swirling interlacing pattern which emphasises the importance of the script. The top of the mihrab meets in a keel arch composed of stone voisourres. Above the stone, stucco moldings echo the shape of the keel arch below an additional band of kufic script. The columns of the interior of the mihrab a dark marble and flanked by outer columns of a lighter stone, matching the off-white of the stucco. Through the use of altering red, white and grey stone vertical stripes, the mihrab creates an eye-catching motif which contrasts the off-white stone which surrounds it. The mihrab of the Mosque of Ahmad Ibn Ţūlūn can be seen as highly influential as many mihrabs after its creation also implicate this play of light and dark as well as contrasting colors.

The mihrab of the Great Mosque Córdoba, is one of the opulent in the history of Islamic architecture. Originally constructed as a Christian church, the Great Mosque of Córdoba was transitioning into a mosque in the late 8th century by Abd al Rahman, the last Umayyad prince and the first Emir of Andalus. The interior of the mosque is famously colorful, containing piggy-back arches with horseshoe arcades composed of alternating brick and stone voussoirs, creating a dizzying red and white striped effect. Like the Mosque of Ahmad Ibn Ţūlūn, the use of spoliated capitals within the Great Mosque of Córdoba recalls a strong ancient Roman influence, as these capitals were originally from Roman buildings. In 962 AD, the ruler Al-Hakam II further elevated the opulence of the building by constructing a large new mihrab and an entire room leading to the mihrab.  This room, or maqsurah, was the first of its type and was constructed as a private praying space for Al-Hakam II himself. This addition of the maqsurah serves to further accentuate the mihrab, as the mihrab now consists of entire room facing Mecca, instead of merely a niche in the qibla wall.

Due to the emphasis of prayer to the Islamic faith, the mihrab is the most important  feature of the mosque or other religious building. Because of the requirement for Muslims to pray five times a day, not all mihrabs were located in mosques. The mihrab owned by the Metropolitan Museum of Art, originally from Isfahan, Iran, was created to indicate the direction of prayer for the madrasa located in Isfahan. Designed to be eye-catching as well as awe-inspiring, the mihrab indicates the qibla wall, as well as illustrates the importance of the direction the wall faces. Composed of cut and glazed tiles joined into arabesque patterns and calligraphic inscriptions, the pointed arch of the mihrab is outlined by a band of white with blue kufic script below a large overlapping vine design. Geometric patterns fill the interior of the niche and serve to emphasize its depth. These designs are largely contrasting light and dark shades of blue with milky white, yellow, and dark green and aim the eye to the focal center inscription of the piece. Due to location, cultural differences and building traditions, mihrabs vary greatly in their forms and decorative elements although they all indicate the direction of Mecca.

The mihrab of The Metropolitan Museum of Art, utilizes light and dark tiles to compose an intricate and mosaic. Yet, colors throughout this work vary more greatly than those of the Mosque of Ahmad Ibn Ţūlūn, with a wide array of light and dark blues, greens and even oranges, both these mihrabs greatly use color. These mihrabs also vary in their use of design. While the mihrab from Iran combines these colors in a complex pattern, the Mosque of Ahmad Ibn Ţūlūn creates large and stark vertical stripes, seeming plain in comparison. However, both mihrabs, through their use of color, achieve the goal of setting the mihrab apart from its surroundings.

While this lavish decor presents a seemingly highly materialistic approach to worship, the decor of many mihrabs focuses the viewer on the word of God through the inclusion of script. These inscriptions, often quotes from the Quran, are incorporated as a part of the decoration of the mihrab. The practice of using script as decoration is common in Islamic art, as calligraphy is considered a high form of art in Islamic cultures. Calligraphy is highly valued in Islamic art due to the lack of depictions of human and animals forms, especially in religious imagery. In the mihrab of the Great Mosque of Cordoba, a band of kufic script outlines the entire entrance of the maqsurah. This script declares thanks to God as well as to Al-Hakam II himself, as he has constructed this extravagant religious display. The inscription reads, “Praise be to God, master of the worlds who favored Al-Hakam II, the servant of God, the prince of the faithful…for this venerable construction and helping him in the building of this eternal palace, with the goal of making this mosque more spacious for his subjects, both something he and they greedily wanted”. This script, written in gold inlaid on a blue background, is illuminated by the light of the dome above, which gives the highly lustrous arch and its surroundings an ethereal quality, announcing its importance. Therefore, the script seems to justify the grand decor in the house of worship, as it declares the reason of its construction as Al-Hakam II’s servitude to God.

This use of an inscription, while it can also be found in older mihrabs such as the one located in the Mosque of Ahmad Ibn Ţūlūn, is also found in more recent pieces, such as the mihrab from Isfahan. Unlike the script in the mihrab of the Great Mosque of Córdoba, neither of these works include references to the ruler at their time of construction, or their builders. Both the script of the mihrab from Isfahan and the Mosque of Ahmad Ibn Ţūlūn only reference God and Muhammad.  The inscription around the exterior of the Isfahan mihrab contains the hadith of the Prophet Muhammad from the Quran 9:18-22 in kufic script. While the interior calligraphy reads, “The Prophet (may blessings and peace be upon him) said: The mosque is the abode of every believer”. These inclusions of Islamic scripture further emphasizes the place of the mihrab as one of high importance in the Muslim faith, recalling its usual location in the house of worship as one of high importance to the faith.

While mihrabs vary greatly due to differing influences of time, location and culture, all are constructed to indicate the direction of Mecca. The focus on the decor and opulence of these works serves not to distract the viewer from worship, but instead to call attention to God and the reasons for religious dedication and beliefs. Furthermore, mihrabs are created to not only distinguish the qibla wall, but also to demonstrate its importance to the faith. This importance stems from the focus within the faith of Muhammad himself, as without him experience in Mecca and the holy site of the Kaaba, the Quran as well as Islam itself would not exist. This focus, while shown in the beauty of the mihrabs and their composition, can also be explicitly shown through the inclusion of script within or around the pieces. Therefore, while these contrasting elements ranging from color to architectural composition, distinguish mihrabs from one another, they all demonstrate the importance of worship to the Islamic faith.