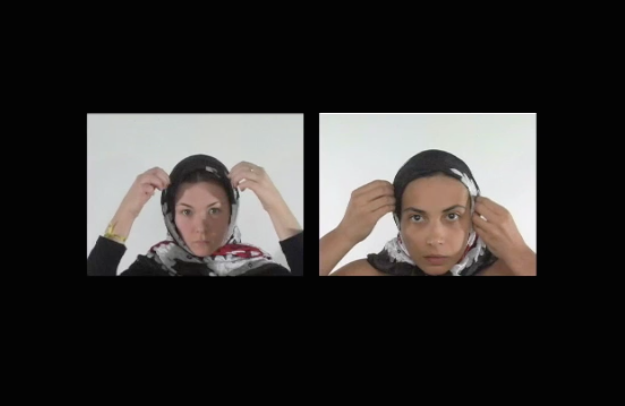 Tulu Bayar’s Confluence encourages its viewers to think deeply about what it actually means to be Muslim in contemporary society. The video opens with two figures– one who appears to be white, who is clothed, and the other (Bayar herself) whose complexion and hair color are considerably darker and who appears to be unclothed. They both stare back at the viewer directly, treating the camera– and, by extension, the audience– as a literal mirror as they adjust their hair and appear to be simultaneously looking at themselves and the viewers.

As the viewers stares back, they are confronted with the gazes of two very different individuals. The simple act of staring in this context seems to be charged. The viewer is receiving two simultaneous gazes– one from a white woman, and one from a non-white woman. Perhaps the viewer feels differently when confronted by each woman individually; it is this difference in the perception of the gazes that forces the viewers to consider the reasons why they feel differently about meeting each gaze.

The woman on the left is the first to wrap her hair in a headscarf, perhaps a hijab, while the woman on the right (Bayar) continually adjusts her hair as if looking in a mirror. When the woman on the right begins to put on a headscarf as well, the expectations of the viewer are quickly denied; the woman on the right ties the scarf under her neck, clearly emphasizing the fact that she is not wearing an Islamicized garment, unlike the woman to the left. The expectation held by the viewer is that the woman with the darker skin would be the one to wear a hijab, showing how issues of skin color and other physiological traits are highly tied to identity, including religious identity. This highlights the point that perhaps the identity of religion is more based in politics than based in intangible beliefs.

This denial of expectations seemingly continues: the woman on the left removes the scarf in favor of a brown curly wig, while the figure on the right continues to refold the headscarf around her face in not necessarily Islamicized ways, and by the end of the video (before it begins to continuously loop) both women are wearing the same brown wig and adjusting it furiously before the audience. The wig is a reference to the Hasidic Jewish practice of shaving the head in favor of a wig to maintain modesty and privacy, an act that functionally serves the same purpose as veiling in Islam. The audience is less likely to pick up on the significance of the wig, however, because the wig has not become a politicized symbol in Western culture like the veil has. This juxtaposition serves to highlight the discrepancies between religious practice and the political and social implications of acts associated with religious beliefs that are antagonistic to Western culture, such as those associated with Islam.

The entirety of the video is set to a composition designed by Bayar and composed by Ercan Kul. The music carries many Middle Eastern motives throughout, setting the tone of the piece and alluding to the race and religion of the individuals being portrayed. This piece ultimately suggests that stereotypes and perceptions are very much rooted in the natural aesthetic qualities of individuals: skin color, hair color, facial features, etc. It also suggests that objects, as well as these physiological traits, carry purely political significance in contemporary culture. Ultimately, this work poses the question, what does it mean to be Muslim if “Muslim” is a sociopolitical identity instead of a religious one?