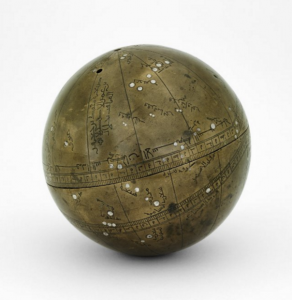 This Celestial Globe made of brass and engraved with silver inlay is an excellent example of early celestial globes produced in the style of Al-Battani’s first globes, which were not used as observational instruments, but instead were used to accurately record celestial data collected through the use of sextants, quadrants, or armillary spheres.¹ There is an inscription in kufic script near the base of the globe which is the signature of the maker, Muhammad ibn Jafar ibn Umar al-Asturlabi also known as Hilal, and the date of the calculations (AH 834 /143031 AD) and the inscription “Suwar al-kawakib al-thabita” which is stating that the calculations were made in accordance with Kitab Suwar al-Kawakib, or The Book of Fixed Stars of al-Sufi, written in 1125.²

Such globes were used to not only record such astronomical data, but also were used as instruments of instruction to demonstrate calculations and positions for students working in observatories. While one of Al-Battani’s most ambitious celestial globes recorded the coordinates of up to the 1,022 stars that Muslim astronomers had named throughout their discoveries, this specific globe only has roughly sixty stars with zodiac names engraved along the ecliptic line, which records the sun’s path over a year. Produced during the Timurid Dynasty, this combination of astrology and astronomy in such a visually appealing work can be interpreted as a mutual support of the arts and sciences from Timurid rulers.