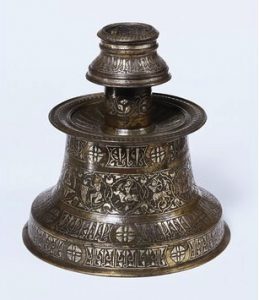 Made out of cast brass and decorated with engravings and silver inlay, this 13th century candlestick depicts the twelve signs of the zodiac in roundels surrounded by various bands of inscription in naskh script. The form of the candlestick itself conforms to the very standard shape and construction seen widely throughout Islamic art, with the features of a round base, bell shaped body, cylindrical neck and a wider top to hold the candle itself. The inscriptions are conventional blessings to go along with the zodiac designs which translate roughly to “might and lasting life, laudation and praise! Magnificence, elevation and splendour! Godliness, beneficence, and praise!,” around the upper nozzle, “might and lasting life, laudation and praise magnificence and grandeur,” around the upper body just above the signs of the zodiac, and finally around the lower part of the body “Might and lasting life, laudation and praise, magnificence and grandeur godliness and beneficence, forbearance and reserve and A! Knowledge and fidelity and A! And lasting life to its owner.”1 These bands of script, variations upon the same blessing are then finished with “with bliss” repeated around the base of the candlestick, completing this blessing to its owner.

The signs of the zodiac are shown exclusively in their full figural representations, transforming the symbols that more typically are shown without human figures to include them. This can be seen in Pisces, usually depicted simply with two fish, has been transformed to be a man on a pedestal with a fish in each hand. Transformations of similar nature can be seen throughout the rest of the symbols. More in relation to the zodiac symbols themselves, there is a more recent engraving presumed from the 18th or 19th century which is the owner’s name carved over the sign of sagittarius 2, so it can be assumed that perhaps the later owner themselves identified with this sign, therefore placing their name in its location.