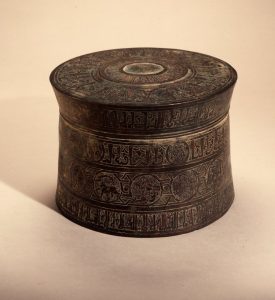 Box, 12th century, Islamic, Bronze and Copper inlay, Khurasan found in Iran. Currently in the collection of The British Museum (1967,0724.1)

This cylindrically shaped box and matching lid with slightly flared top and base measuring roughly 9” in diameter is cast in bronze and decorated with engraving and copper inlay. The box’s decoration consists of roundels containing images representing the twelve zodiac signs on the body of the box surrounded by inscriptions of kufic and naskh script in bands above and below. The lid is decorated with two circular bands of inscriptions in kufic and naskh script surrounding an open circle in the center of the lid, while the side of the lid flush with the body of the box reads kufic inscription. All these inscriptions are all blessings but their exact translations are not known.¹

Unlike most depictions of the zodiac symbols in Islamic art, the symbols on this box have been adapted to exclude figures which suggests perhaps in this specific instance the object was used in more of a religious context. While a large majority of the signs of the zodiac don’t contain human figures, such as pisces represented by two curved fish opposite each other. Other zodiac signs that usually show human figures are simplified to show just hands holding the sign’s distinct attribute or image. Examples of this can be seen in the roundel for sagittarius, which is simplified down to a pair of hands drawing a bow and arrow, or virgo where instead of the full figure simply hands are shown holding a spike of grain, effectively representing each sign respectively.