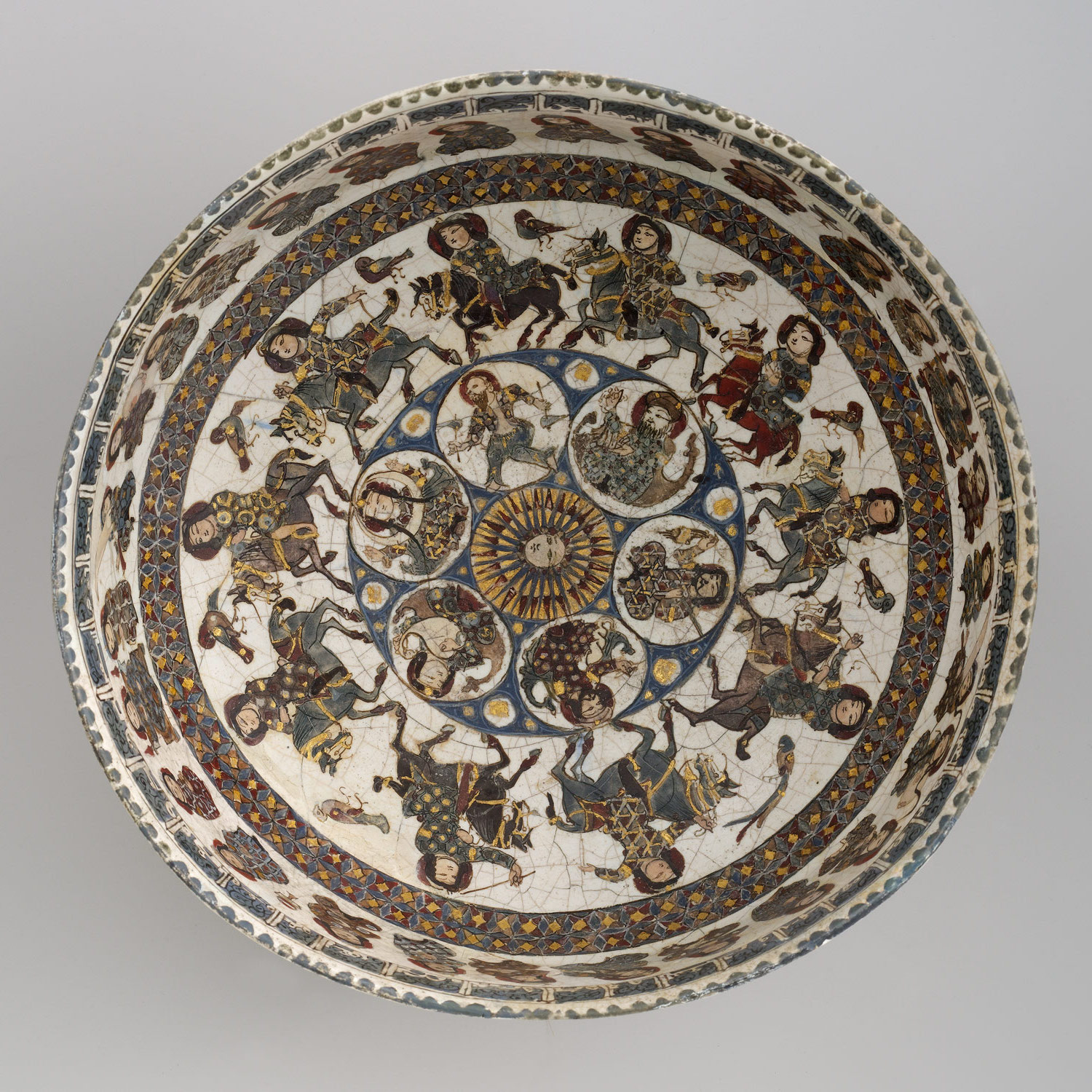 Bowl With Astronomical and Courtly Motifs

Attributed to Central or Northern Iran

The Metropolitan Museum of Art

When you look at the Bowl with Courtly and Astronomical Motifs, it is as if you are entering into another exotic world. This bowl was most likely created in Central or Northern Iran during the late 12th or early 13th century. The decoration on the bowl is divided into 6 bands that wrap around the inside of the bowl, combining the realm of the universe with the realm of humanity.

The center of the bowl is filled by a sun motif with red and blue colored rays against a gold background that expand outwards to the edges of the roundel. The sun is personified. It has eyes, a nose, a mouth and eyebrows that create a relatively flat expression, and the face is turned slightly to the left. Surrounding the face is a radiating geometric design of circles and spikes representing rays. Surrounding the sun in the next layer of decoration are six medallions with images representing the Moon and the planets, Venus, Mercury, Jupiter, Saturn and Mars. The planets are represented by human figures holding different objects. The planets are arranged clockwise, from the farthest to the closets to the Earth. Each medallion is framed in a white circle. Around those circles is another large blue circle with 18 smaller gold dots and six white and gold circles that filled in the gaps between each medallion, most likely representing the stars that you see in the night sky.

The next band shows a row of mounted horsemen on grey, brown, black and red colored horses, wearing elegant robes decorated with slightly different geometric designs with dark red halos behind their heads. Between every horseman but one, is a still bird that appears to be in mid air but not flying. Each of the birds is unique as well with different colors, like blue, gold, red and brown, and different shapes of the tails and feet.

The next layer is a thin band of geometric ornament. The pattern is made out of ovals and diamonds in different colors like blue, red, tan-gray, and gold. The next row shows seated courtiers and musicians. Across from each other are two enthroned figures with crowns. Like the mounted horsemen, each figure has a red circle around their head and everyone is in a position that is slightly different. There is also an Arabic inscription in the Kufic script that translates to “good wishes” and “And blessing and merciful and good fortune … and winner victory … and happiness … and grace … and power and happiness … and grace … and power”[1].

Focusing mainly on the center portion of the ceramic bowl, the personified extraterrestrial world of planets and stars stands out against the dark blue background of the inner roundel. The Sun at the very center of the bowl is personified to look like the face of a man. This is because the Sun is often associated with male qualities and masculine characteristics such as power, energy, light, and heat. Arabic astronomers and artists differed in their interpretation and representation of the Sun, astronomers saw the Sun as yet another planet that revolved around the earth, placing it in line with the other planets. Artists on the other hand would place the Sun in the center encircled by the planets[2]. By placing the Sun in the center with golden radiating rays, it connotes a sense of warmth, importance, power and energy.

Unlike the Sun the planets and the Moon are depicted as entire human beings. Like the Sun, Arabic astronomers believed that the Moon was the closest planet to the Earth[3]. Similar to how the Sun is masculine, the Moon is feminine. The artist depicts the Moon as a woman with long braids wearing a large gown with an oversized crescent circling her pale face. The crescent around her face is a symbol of the Moon in the sky. Although the gown she wears hides her female features, her long braided hair makes it evident that she is indeed a female.

Next to the Moon is Venus, shown as a woman playing a musical instrument. Venus is also a feminine planet, whose name originates from the Roman Goddess Venus. Mercury is shown as a bearded scribe writing on a scroll with a pen. Mercury was understood to be a neutral planet that was fairly weak in nature. These ideas are shown through the nature of the imagery, Mercury is more subdued in comparison to the representations of Mars, who is fearsome, and Jupiter who looks wise and powerful.

In contrast to the neutral nature of Mercury, Mars is depicted as the lord of war. In his hands are a sword and a bloody severed head. These symbolize serve as bold iconography to emphasize the warlike characteristics. Jupiter is shown with a large turban, a flowing multicolored robe and a long gray beard. It appears as though he is a judge or sage whose wisdom, fairness and maturity are indicated through his long graying beard. The last planet is Saturn, portrayed as a standing man wearing long pants and an open jacket. In his hands are two pickaxes. This personification is different from the other figures because the face of Saturn doesn’t have the same features; thin almond eyes, small, pursed mouth, and long thin eyebrows. Saturn was the most disliked planet and perhaps that is why it looks more like a foreigner, which in turn might suggest a possible dislike of real foreigners. The two pickaxes in his hands might be representative of Saturn being associated with labor, such as mining.

The planets are shown in conjunction with the hunting and courtly scenes included on the rest of the bowl because they are a reminder to the user of the bowl that the planets and the stars have daily effects on human life. These planets were believed to rotate in concentric circles around the Earth. Their position in the sky in relation to the stars around them associated each planet with signs of the zodiac. The planets Jupiter and Venus were considered beneficial, Saturn and Mars were considered detrimental, and as mentioned previously Mercury was considered neutral[4]. These concepts in Arabic astrology most likely served as guides and signs of what was going to happen and why. By including the temporal world, it is understood that the universe and mankind are linked together.

[2] Stefano Carboni. Following the Stars: the Zodiac in Islamic Art 9