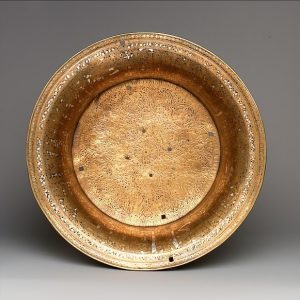 Originally part of a set with a matching ewer, this basin is lavishly and intricately decorated on the interior. The exterior, in contrast is relatively plain with an inscription. Made out of brass and embellished with inlaid silver and engraving, the pair would have been used for ablutions in most likely a wealthy or royal household. The interior decoration, consisting of a combination of depictions of the signs of the zodiac and planets, as well as bands of inscriptions and vegetal decoration work as a record of early Islamic astronomical and astrological belief and knowledge.

First it is important to understand how early Islamic astrologers interpreted the structure of the universe in relation to the decoration on the interior of the basin. It was believed that “the universe was constructed from a series of concentric circles with the Earth at the center surrounded by a number of Spheres, each corresponding to the space in which a planet rotates,” (Carboni, 3). The visual language of the decorative elements of the basin allude to this belief of the concentric layers of the universe, as seen in the concentric bands containing roundels depicting the signs of the zodiac and planets within. Each of the seven planets were assigned two signs of the zodiac which they were thought to control, except for the Sun and Moon which only controlled one zodiac. It is because of this close relationship between the planets and the constellations of the zodiac that the two are frequently seen together in the decoration of Islamic art, as it is seen in the basin. This further reflects the interconnection between astronomy and astrology in Islamic culture, two studies which were seen as nearly analogous with each other, which is quite the opposite of what is seen in Western beliefs and culture today.

On the inner walls of the bowl there is an inscription in thuluth script partially inlaid in silver which translates to, “Happiness, abundance, felicity, honor, glory, permanent prosperity, eternal memory for the illustrious lord,” which is a blessing to the owner, but also a reference to the talismanic imagery used through depicting the signs of the zodiac and planets. This Islamic belief in the power of the stars and constellations is visually reinforced by this inscription, illustrating the strong connection between science and belief, faith and the universe.